When I adopted Charlie, one of my colleagues warned me, “He won’t last the six months at your place.” That disturbed me because I had lost three cats within the last three years. I hoped it wouldn’t happen again for Charlie loved to romp and hang around the woods outside our home. Ten years later, he still does!

More than once, I’ve searched for him at night or early morning if he hadn’t returned home by dark. He usually comes home when it was safe (I believe). He is a great hunter and a very wary traveler. That would account for his survival. He is a Maine Coon cat, which gives him  coloring that blends into our surrounding. He wears camouflage!

Our property is part of a forest. Wildlife from owls, hawks, coyotes, bears, fox and raccoons roam at different times looking for a meal. We found animal tracks in the snow around the perimeter of our house in 2009, identified as mountain lion. A neighbor photographed a mountain lion in our neighborhood that same winter. Another watched a lion in his back yard drag a deer off in deep snow. Scary. Now, I fret at letting Charlie out or before I go out at night.

I walked up to a black bear this last summer. He was more frightened of me than I of him. However, I know he is only about a year old. I watched momma bear and her three cubs the previous summer as they caught Charlie’s attention at the living room window. They were picking berries right by our door. The cat was ecstatic. The bears were so cute. But leave them alone and all is well.

My bear friend and I had unanticipated meetings this past summer, I felt he was obviously not accustomed to nor totally aware of his surroundings and unsure of what is perceived as a danger.

The bear and I had met about four times. Each time he seems to contemplate what to do next. Finally he remembers what mom said before he last departed to venture on his own, “Stay away from two legged animals who live in strange caves.” So he clumsily turns stumbling and crashing through the woods. If I walked up to this same bear and he were older, would he turn and run as before? I hope so.

Two days ago, as I walked our half mile drive, I heard a sudden crashing to my left among the trees at the edge of the drive. From the sound of each step, whatever it was, it was heavy. I stopped, anxiously determining what it could be. Then I realized it was my friend the bear. No other animal was as clumsy and noisy as he. I think we both kept an eye on each other. I had to return after retrieving the mail and there was no sign of my friend. He was probably up a tree like his mom taught him to avoid humans.

My cat, Charlie is still part of the family. I believe he thinks himself human. He understands some of our words and we understand some of his. Between his purrs, meows, growls and body language, I know when he is hungry, happy, angry, wants a treat, wants us to accompany him on a walk, doesn’t want us to leave or wants us to go to bed by 9:00 PM. He jumps on our chest in the AM telling us it is time to get up and be about our business, which is to feed him and let him outside! If we don’t feed him on time, no worry, he finds food for all. He meows while carrying a rodent in his teeth. As he approaches the door he indicates, “I know you are out of food, so come eat. I’ll share.”

Yes, cats are for people.

A story bounced around in my head for two years. Twelve years later the manuscript  was completed! I spent another two years editing and polishing it up.

Why so long to write this story? Well, I was involved in something called ‘life’: working, teaching, building houses with my bare hands, getting married, etc. So, it took a while. Oh, did I mention writer’s block. Yeah, I had that a few times.

In the end, I built up enough confidence to share my work with a terrific writers group. This group tells it as it is. That’s what I want. Honesty, whether it hurts or makes you smile. I was in a group where everyone was nice. That was nice, but it didn’t help. Everyone in the group  had really nice stories–every day–every time–never miss. Impossible! They wanted to be nice. I wanted to sweat and toil. I wanted to see more! I took the door.

Whenever possible, I read about writing. I read novels that are in the genre I am writing in and I listen to what others have to say about writing .

Being consumed in writing this story for such a long time has taught me how much I’d forgotten or what I just didn’t know.

For about 30 odd years I wrote poetry whenever the mood struck. I’ve carefully stashed my poems into a briefcase–for later. Sometimes I make drawings, which relate to the poem. I think of poetry as a canvas with which to paint words. That is what I’d tell my students when I wanted them to write something to be included in their assignments. (I was a computer teacher and a science teacher.)

May-Sept, I displayed artwork in Cushing, Me while we vacationed at the Saltwater Farm Campground. The campground offers a peaceful retreat on the St. George River, not far from Andrew Wyeth’s home and the famous Olsen house depicted by Andrew.

Another favorite place is The Cattle Dog Coffee Roasters Cafe, in Hernando, FL. two artworks are on display until December, 2011. If they sell, I will ship another painting to replace them. How exciting is that?

If you enjoy the world’s best coffee, go to the Cattle Dog. James, is a wonderful chef and takes pride in roasting a great variety of coffee beans. That is the only coffee I can drink! And, James bakes wonderful pastries. People get there early to grab whatever pastry is left in the display case. Those who come late hang around if they know James is baking a new batch of pastries. I love the sticky rolls with the pecans and brown sugar. There are other good eats as well. You just got to go there. Don’t forget to look for my work while you are there!

My current major painting is a portrait of two women from the WWII era. Painting in color from a black and white photo is difficult but doable. It is turning out fine. It will be on my Portraits page soon at http://www.jomorise.com. 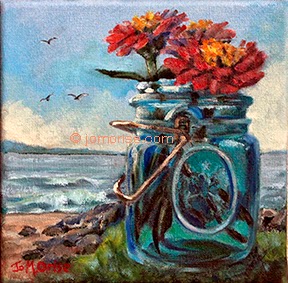